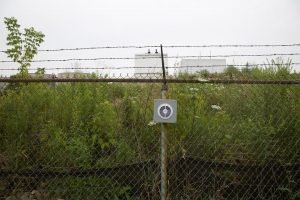 Montreal sound-artists Jen Reimer and Max Stein were the 2018 IICSI/ Musagetes Improvisers-in-Residence.  During their six-month, multi-visit residency from February and September 2018, Reimer and Stein expanded their ongoing project “Sounding the City” to include Guelph, ON. “Sounding the City” is dedicated to capturing urban environments and re-imagining their soundscapes through site-specific installations and acoustic interventions.  Reimer and Stein began their residency by introducing their project at a Thinking Spaces: The Improvisation Reading Group and Speaker Series session on Friday, March 2, at the IICSI House. Throughout their residency, they explored the city of Guelph for places “empty enough to make a sound […] but responsive enough for sympathetic resonance to occur.”1 Ultimately seven sites were chosen: (1) The Ward Train Trail, (2) Douglas Street Alley, (3) The Covered Bridge, (4) Palmer & Queen Street, (5) Bullfrog Pond Park, (6) Waterworks, and (7) Silvercreek Parkway. 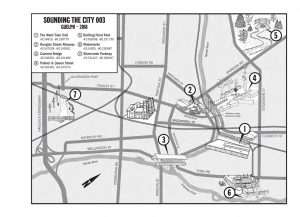 Reimer and Stein’s residency culminated in an exhibition and book publication at the Boarding House Gallery (6 Dublin St. S. in Guelph, ON) that was launched during the 2018 Guelph Jazz Festival & Colloquium (Sept. 12-15). During the Festival, visitors to the gallery were provided with postcard maps and invited to explore the seven site-based installations in various locations around the city of Guelph. A multimedia exhibition of their project continued in the gallery until Sept. 30, and included an interactive archive of the installations available online at https://soundingthecity.com/003. 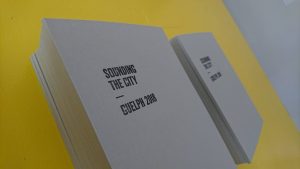 The publication Sounding The City – Guelph 003, published by Publication Studio Guelph and designed by LOKI, includes documentation of the seven sound installations, and features a foreword by IICSI Graduate Research Assistant and PhD candidate in philosophy at the University of Guelph, Rachel Elliott, and a map of the sound installations by Urban Geographer, Daniel Rotsztain. 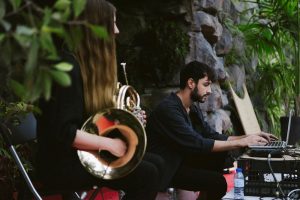 Jen Reimer (CAN) & Max Stein (USA) are sound artists based in Montréal. Their work explores the resonances of urban and rural sonic environments through in situ performances, installations and spatial recordings. Since 2009 they have created performances and installations in abandoned, transient and resonant spaces in North America and Europe including St-Urbain Underpass, Wellington Tunnel (Montréal), Union Station (Winnipeg), Mãe d’Água (Lisboa, PT), Estufa Fria (Lisboa, PT), Rotonda della Besana (Milan, IT), Vapaan Taiteen Tila (Helsinki, FI) and Sottopassaggio di Porta Vescovo (Verona, IT). Their performances combine live and processed horn and field recordings with the inherent sonic environment to create an immersive and physical experience of sound and space.