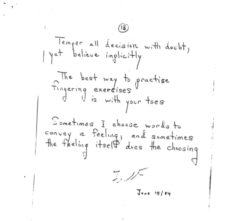 This reflection was written by Bob Wiseman, and appeared in the April 2022 edition of the ImprovNotes newsletter.

It was in Toronto in the 1980s. I was searching for meaning and understanding in my pianistic improvisations. There was no Youtube, no internet. Today, I can watch footage of Freddie Stone in the late 60s on tour with Duke Ellington: after he madly and effortlessly solos, the crowd freaks out and Duke Ellington takes the microphone and says: “Freddie Stone, Freddie Stone [more applause] . . . We don’t know what he’s doin’ but we don’t want him to stop.”

I had finished studying music at York University and Fred Stone’s name occupied the top of the list when conversations turned to a debate over the best teachers of improvisation. Up until then I had worked with memorable pianists—Casey Sokal, Darwyn Aitkin, and Stanley Cowell—but Freddie Stone, who was a flugelhorn player, gave me the best piano lesson of all. Back then, there was a saxophonist I knew named Jonnie Bakan who was a regular student with Fred. I assumed this made him the recipient of magical knowledge. Not long ago, I asked him about those times.

Jonnie: Can you see that? I think I’m gonna scan this and send it to you. It’s a booklet of poems and aphorisms and thoughts.

Bob: From you, about Freddy?

Jonnie: No, this is Freddie’s writing.

Bob: Oh, awesome! That would be very colorful. That’d be very deep to add.

Jonnie: So he writes, “I prefer feelings to words, truly evaluative processes, but a partial and inflexible equivalent.”

Jonnie: Oh, I’m going to send this to you. Okay. Yeah.

The environment is your orchestra energies, your pulse
All sounds in motion in a way premising.
Do not emulate history,
There is no need for more of the same
Be history to become of historical value.

Bob: And how do you happen to have these dispatches?

Jonnie: He just gave it to me. I mean, he wrote them and gave them to a lot of students. My favorite, though, is right at the end:

Evaluate pitch and tonality by smell,
hearing has little to do with it.

It was just inspiring. I think the first early lesson with him, he had this little music toy that was like a mechanical music box that you could punch holes in cards to make your own compositions. So we sat there with the punch cards and he said,

Look, if the shape makes sense, then the music is gonna make sense.

Oh, that’s smart, you know? Or another time I went there and he said,

Jonnie: Yeah. I was thinking about it for a lot. It’s gonna sound stupid, but it was like he was making the impossible possible. It was like, it’s not impossible—if you can think it, then it’s possible. You just have to let the thought realize itself. And part of that was that I was just a kid, 20 years old, trying to figure shit out, and Freddie was fundamentally a musical phenomenologist. Yeah. He was really about that. He understood the experience, and sometimes that was expressed as a more or less rational mysticism, but more often as a close empirical reading of sense and emotional experience. Like, he really was aware of the creative experience. He connected sound as a moving and dynamic sensory experience to a similarly dynamic emotional equivalent that was rooted in histories, experience, individual personalities—especially individual personalities, their subject.