What are the Adaptive Use Musical Instruments (AUMI)?

AUMI enables the user to play sounds and musical phrases through movement and gestures. This is an entry to improvisation that enables exploration of sounds ranging from pitches to noises rather than learning set pieces. This open approach to music enables anyone to explore and express a range of affects, both by themselves and in response to, or in conversation with, others. While AUMI can be used by anyone, the focus has been on working with children who have profound physical disabilities.

In taking these participants as its starting point, the AUMI project attempts to make musical improvisation and collaboration accessible to the widest possible range of individuals. This approach also opens up the possibility of learning more about the relations between ability, the body, creativity and improvisation, from within a cultural context that does not always acknowledge or accept people with disabilities.

The AUMI project continues to be revised and improved with input from the technologists, students, therapists and feedback from registered users.  An on-site training program is now available. The latest initiative is the development of an AUMI iPad App.

We celebrate the brand new update of AUMI for iPad and iPhone, now available in iTunes! 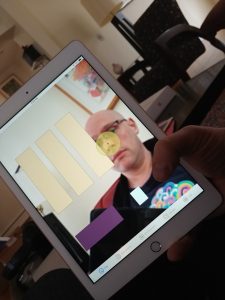 applications of the Adaptive Use Musical Instrument (AUMI), a software-based instrument meant to adapt to the user, rather than the other way around. AUMI is open source software, available for free online to anyone interested in an instrument you can improvise with via slight movements of your face, body, or finger. The project was an initiative of musician, composer, and humanitarian Pauline Oliveros before her passing, and now researchers Ellen Waterman, Gillian Siddall, and Laurel Forshaw have been working together with AUMI developer Henry Lowengard to realize and test a new AUMI instrument called AUMI Sings, an AUMI instrument intended to facilitate participation in choirs.

On November 10th 2018, this team organized the first trial of AUMI Sings, pairing three differently-abled AUMI Sings singers with the St John’s Vocal Exploration Choir, an improvising choir founded by Dr. Chris Tonelli during his IICSI post-doctoral fellowship at Memorial University and currently under the artistic-directorship of Alison Carter and Mack Furlong. This large ensemble spent the day improvising together with guidance from Laurel Forshaw. Afterwards, participants were interviewed by the research team with assistance from graduate students from Memorial’s Ethnomusicology program, several of whom are co-supported in their studies by IICSI research assistantships.

The data collected will be used to aid the continuing development of AUMI and AUMI Sings and will help to inform future projects hoping to build bridges across abilities through collective musical improvisation.

Led by musician, composer, and humanitarian Pauline Oliveros, the Adaptive Use Musical Instrument (AUMI) project brings together the expertise of technicians at the Rensselaer Polytechnic Institute (RPI) and the community education initiatives of the Deep Listening Institute.

In collaboration with musician and occupational therapist Leaf Miller, the AUMI software interface was first used in drum workshops with children with disabilities at Abilities First School located in Poughkeepsie, New York in 2007. Since these initial workshops, the software interface has been made available as a free internet download and is now in use by musicians and therapists both nationally and internationally.

AUMI was adopted by the Gender and the Body research group of an international research project on Improvisation, Community, and Social Practice (ICASP). ICASP is centered at the University of Guelph, Ontario, Canada and directed by Ajay Heble. ICASP researchers are exploring improvisation as a model for social change in a variety of teams drawn from 33 researchers.

In 2013 the first six years of ICASP concluded with AUMI named as a top rated project and transformed to a new project: International Institute for Critical Studies in Improvisation (IICSI). Gender and the Body research group continues with research on AUMI and its value to students with special needs as part of IICSI through 2020.