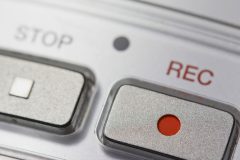 Sorry about the Sound Quality

Improvisation, Living in the Moment and the Beauty of Mistakes

Hi, my name is Caroline Gillis and welcome to my audio interviews: Sorry about the Sound Quality: Improvisation, Living in the Moment and the Beauty of Mistakes.

I am an actress, mainly a theatre actress and in 2013 I went back to school to get my MA in Theatre Studies at the University of Guelph. As a graduate research assistant for ICASP (or Improvisation, Community and Social Practice) my task was to interview some of my friends and colleagues in theatre about improvisation, and about how they use it in their work and how it may have impacted their lives.

I’ve interviewed comedians, singers, voiceover actors, improv teachers, directors, writers and creators – and most of the artists I spoke to do a combination of all these things. Actors have to be improvisers on a daily basis, juggling many different types of work (creative and sometimes not) to keep body and creative soul alive. You will see how improvisation has positively affected the lives of these artists.

So, I hope you enjoy what these artists were kind enough to share, in a very personal way – and again “sorry about the sound quality.”

Hi, Caroline here. My first interview is with actors and creators Birgitte Solem and Clare Preuss. I worked with Clare and Birgitte at the Blyth Festival in Ontario years ago where we all acted together in a production of Anne (An adaptation of Anne of Green Gables). They share with us their insights on using improvisation as part of their work in everything from murder mysteries to interactive street theatre to teaching yoga. This interview immediately brought up themes that would continue to come up throughout my subsequent interviews: exploring the fear that some actors have of improv and why that is (Birgitte shares two very funny reasons why she thinks we can be so nervous about improv – so nervous that we can feel the “sweat on our fingertips” to quote her) – as well as themes about how we are all striving to live in the present moment and trying to be being open to inspiration. I interviewed the women in my apartment in Parkdale over pizza and beer. Hope you enjoy it and “sorry about the sound quality.”

Hi, Caroline here. In my second interview about improvisation I interviewed Nadia Ross who is an actor, writer, director – well theatre artist – and is the artistic director of her own independent theatre company called StoUnion which is located in Wakefield, Quebec. Nadia and I met when we were both young actors and artists in Toronto and we were part of a collaborative creation in the early 90s called The Lorca Play which she references in her interview. It was a wild deconstruction of Lorca’s House of Bernarda Albaperformed by seven women and one man. She talks about it in reference to how we create languages in theatre, in the same way musicians have a language. She is, incidentally, the daughter of a jazz musician and she shares some interesting thoughts on how that has affected her work. She’s developed a language with her own company, and she has some fascinating things to share about inspiration and working with what she calls and “open system” which employs a lot of improvisation – and waiting. StoUnion also invites community involvement in its projects in Wakefield and I think you’ll enjoy hearing about their yearly live television show.

I interviewed Nadia behind the Theatre Centre in Toronto where she was performing with her company in the show: What Happened to the Seeker? Hope you enjoy. Sorry about the sound quality.

Hi, Caroline here. This is my third interview about improvisation in theatre and it’s a pretty ambitious one. I interviewed eight women in my Parkdale apartment in Toronto. About 4 or 5 years ago I started taking improv classes with my friend, Kate Ashby, who had formed her own school for teaching improv, Kate Ashby Academy. One of the first classes she taught was called Broadprov – she started creating different names for the classes including a class called On Goldenprov which she created for seniors which you will hear referenced in a this interview as well as the following interview with a couple of Kate’s other students. Broadprov consisted of professional female performers from many different avenues of acting and creating. This particular incarnation of Broadprov consists of comedians, theatre actors, writers, voiceover artists and singers. It was a magical class, to say the least, and so this interview was a reunion of sorts and actually becomes a little emotional at one point. When the class started some of us knew each other well, some a little, and some of us had never met at all. But if felt like something that was destined to be – a connection happened in that class that couldn’t be denied. A lot of that had to do with trust, and with Kate creating a safe environment for us to work. Trust and feeling safe to create are themes that has come up over and over in these interviews, and this class provided that. It was therapeutic as well as creative. And it presents an interesting argument for process versus product which is also a common theme among theatre artists I’ve interviewed.

Unfortunately, I couldn’t reunite the whole class for this interview but the “broads” that I were able to interview included: our teacher, Kate Ashby, and my classmates, Samantha Espie, Tracey Hoyt, Kirsten Johnson, Caroly Larson, Julie Lemieux, Teresa Pavlinek and Shoshana Sperling. I interviewed the women in my noisy home over drinks and sandwiches on a Sunday afternoon. Enjoy. Sorry about the sound quality.

Hi, Caroline here. This is the fourth interview in my series on improvisation – or theatrical improvisation and creation. In the previous interview I spoke with some students of Kate Ashby Academy – women from the original class of Broadprov. Broadprov has continued to morph over the years, with new female theatre artists joining the class as others left – but in fact some of the women have stayed with the class since its inception because of the positive impact it has had on their work and their lives. Here I interview Emily Hurson, an actor and a writer who was actually in the original Broadprov class (she couldn’t make the reunion interview), and also Wendy Lands, a singer/songwriter and voiceover artist and actor who has been with Broadprov for the last few years. This interview is slightly unique in that I interviewed Emily and Wendy before and after an improvisational show of their work with Kate Ashby Academy – in this case a somewhat different type of presentation for them – their class, Broadprov, would meet for the first time on stage with the members of the senior’s class, On Goldenprov. It was an interesting experiment with improv on stage – a kind of “pure improv” to borrow a term from my earlier interviewee Birgitte Solem. Kate would set up two person scenes and have them performed by one member of each class. Strangers (for the most part) meeting on stage. Again, we touched on themes of fear and anticipation which is especially present when one is performing in front of an audience – of friends and family for the most part – but as we hear from Wendy friends and family can sometimes be the scariest of audiences. We also have a quick cameo from Wendy’s mom who watched the presentation that night.

I hope you enjoy this interview which took place in the lobby and then later the dressing room at the Ossington Street Theatre in Toronto. Sorry about the sound quality.

Hi, Caroline here. In my fifth and final interview on improvisation, I speak with two of – probably the finest improvisers in the country – Kathryn Greenwood and Ed Sahely. It’s an interesting look at how they found their way into improv and how it changed their lives. They share fascinating stories about their work with Second City, as well as their former company Not to Be Repeated which they co-founded with Jonathan Wilson. Kathryn also shares a bit about the creative process of the very successful sketch comedy troupe, of which she is a part – Women Fully Clothed. Kathryn and Ed illuminate a lot of the themes that have come up during my interviews and have really interesting slants on the frustrations, the joys and the importance of improv in their lives. They also come up with an interesting analogy between math and improv – “a blueprint” if you will. It’s great to hear these long-time friends in conversation with each other – they are personifications of how trust, respect, inspiration and “just making each other laugh” work together to create some great art.

I interviewed Kathryn and Ed over wine and snacks (and lots of laughs) at my Parkdale apartment.
I hope you enjoy this final installment. It’s been a pleasure (and sometimes a technological nightmare) to bring it to you. Sorry about the sound quality.