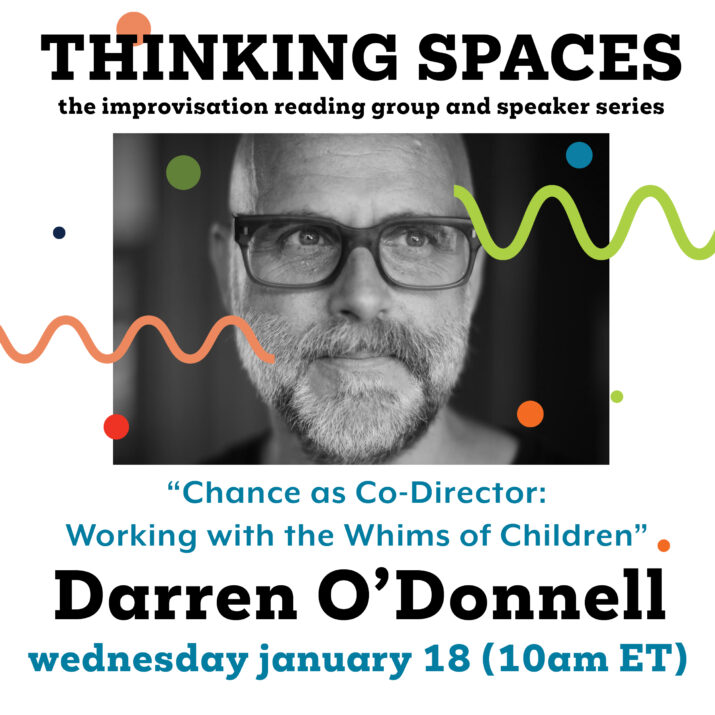 Thinking Spaces: The Improvisation Reading Group and Speaker Series is pleased to present “Chance as Co-Director: Working with the Whims of Children,” a talk by Darren O’Donnell. This event will take place on Wednesday, January 18 at 10am (ET), online (via Zoom). A moderated Q&A will follow the talk.

If you are interested in attending, please register via this link: https://uoguel.ph/tsdarrenodonnell. A Zoom link will be sent to your email the day before the event.

MORE ABOUT THIS TALK:

In this talk, Darren will discuss how a number of projects developed and presented through Mammalian Diving Reflex—the research-art atelier that Darren directs—were conceived through chance encounters with kids, and then how they were shaped and how they evolved in response to the interest of the kids.

Darren will discuss how Mammalian Diving Reflex works with young people in the long term, accommodating the specific youth who come to us, rather than through an audition or hiring process. There’s a good deal of chance and, in fact, faith in that.

Darren will also introduce a model he uses to evaluate the various dimension of rigour in a project and, specifically, how social rigour relies on being very open to chance, as opposed to physical rigour (think cirque du soleil as the ultimate in physical rigour) where chance is absolutely the enemy—in performance, at least.

MORE ABOUT OUR SPEAKER:

Darren O’Donnell is an urban cultural planner, novelist, essayist, playwright, filmmaker, performance director and the Artistic and Founding Director of Mammalian Diving Reflex. His books include: Your Secrets Sleep with Me (2004); Social Acupuncture (2006), which argues for an aesthetic of civic engagement; and Haircuts by Children and Other Evidence for a New Social Contract (2018), which proposes the cultural sector as a site to pilot a new social contract with children. His performance works include Haircuts by Children, All the Sex I’ve Ever Had, The Children’s Choice Awards and Teentalitarianism. His model for long-term collaboration with young people is being applied in London, Bochum, Milan, and Berlin. He is interested in expanding and rethinking the role that cultural intuitions play in the world, particularly around long-term engagement and collaborative friendships that extend into the community.

His institutional collaborators have included the Royal Botanic Gardens Victoria, the Humboldt Forum, the Tate Modern and Tate Britain, the West Kowloon Cultural District, the London International Festival of Theatre, the Metropolitan Region of Rhine-Neckar, the Schauspielhaus Bochum and the Portland Institute of Contemporary Art.