Jazzing the Data in Review 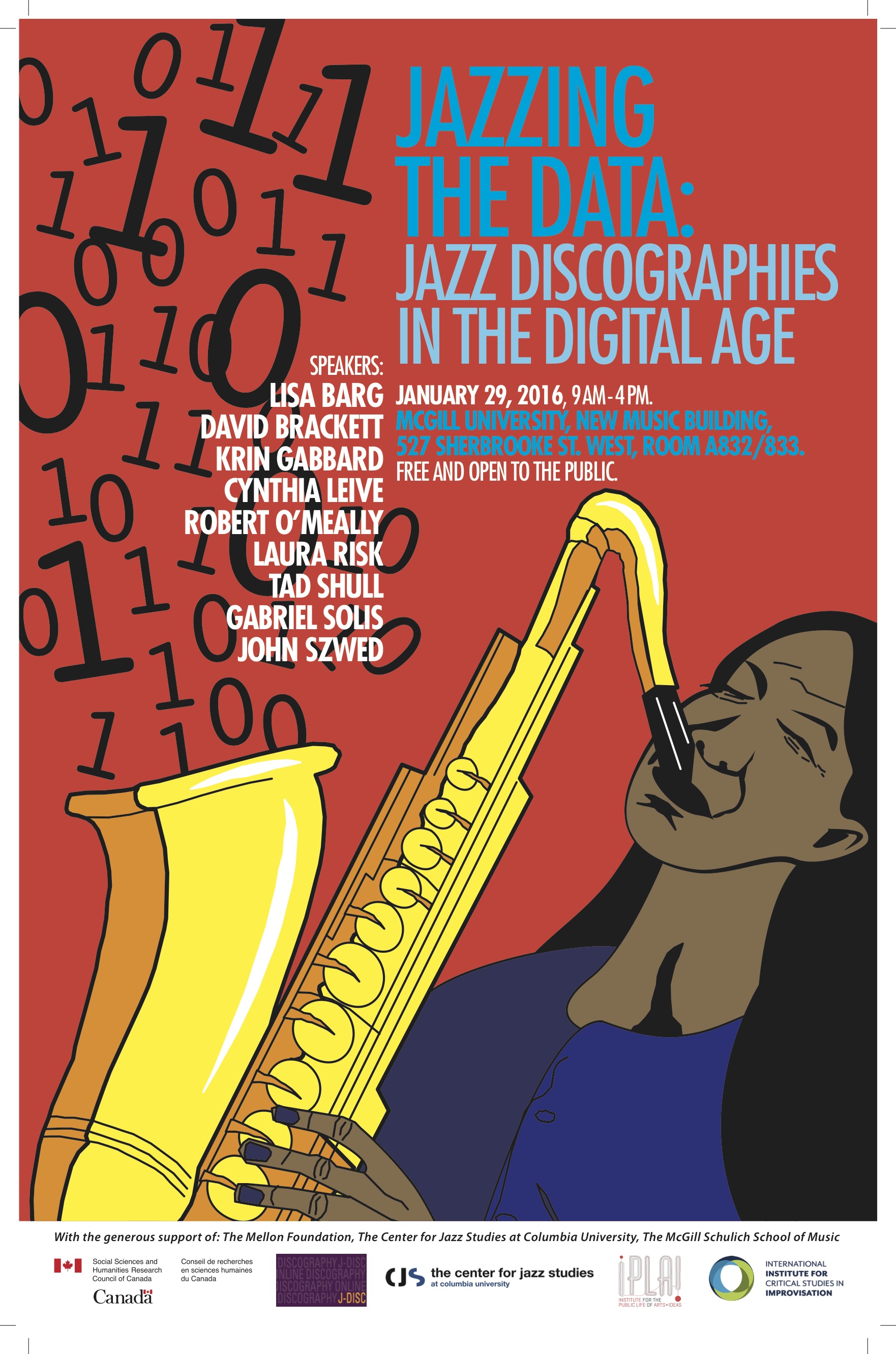 The discipline of discography embraces a wealth of implications, as was proven repeatedly in conference Jazzing the Data at McGill University January 29, 2016. Among other things, since, as the program description stated, jazz studies are “highly indexed to the vast corpus of extant recordings,” discography is closely linked to the process of canon formation—to the complex and contentious process of deciding why certain musics, and musicians, should be considered more important than others. Thus the International Association of Jazz Record Collectors (IAJRC) was much more than a hobby to its founders who, as Krin Gabbard pointed out in his opening presentation “I Didn’t Think It Was Possible,” felt the “imperative of amalgamating information for future generations.”

David Brackett and Lisa Barg expanded on this subject in the course of their interrogatively-framed “What do Musicologists Want From a Jazz Discography?,” stressing among other things the historical disparities created when the mid-20th century work of black musicians considered to be jazz artists is discographied, but the work of musicians considered “race artists” (or “rhythm & blues”) is not. Cynthia A. Leive, the head of the McGill music library, discussed the McGill University 10” Jazz Recording Preservation Project, which for many of the conference participants, opened up the subject of what for many music scholars is an intimidating prospect, the challenge of digitizing historic recordings so that they can be made more broadly available.

A concrete example of this challenge was shown inLaura Risk’s presentation “First Lady of the Violin.” While researching Quebec fiddle music as part of her dissertation studies, McGill PhD candidate Risk became interested in the life and music of Ginger Smock (1920-1995 and pictured here), who had a long career as a commercial musician in Los Angeles and Las Vegas, but whose ambitions as a jazz violinist were discouraged by an industry that preferred its instrumental virtuosi to be male.

Gabriel Solis’ “Jazz Discography, Digital Humanities, and Music Information Retrieval: An Ethnomusicologist’s Reflections” included a fascinating scattergraph of Anthony Braxton’s Composition 77D, and Tad Shull presented “Critical Data: The Effect of Large Data Sets on Jazz Criticism,” and introduced us to Columbia’s minutely detailed online discography-in-progress J-Disc. Finally, Robert O’Meally spoke of the importance of making visible the “invisible history of jazz.” Organized by the Columbia Center for Jazz Studies J-Disc task force, in partnership with IICSI, IPLAI, and the Schulich School of Music, Jazzing the Data proved the importance of collating and making available these vast expanses of discographical data in order to create new knowledge in the growing fields of Jazz Studies and Critical Studies in Improvisation.