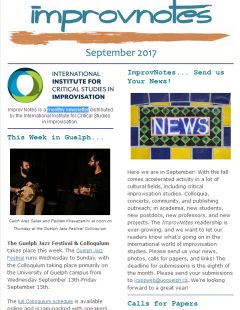 From the September 2017 edition of Improv Notes

…..the Mississauga-based Canadian Arabic Orchestra (CAO) is the first Arabic music orchestra in Canada. Founded in 2015 by Wafa Al Zaghal and Lamees Audeh, the CAO has a mandate to promote Arabic classical music, and to highlight the relationship between Arabic and Western classical music cultures. As they launch their fall 2017 season, more can be learned about the CAO online.

…..the Jenni House Artist Residency is now accepting applications for month-long residencies with a focus on film and media to be help during period of November 2017 to March 2018. The residency provides artists with a studio in a historic log and timber frame building on the banks of the Yukon River in Whitehorse. Professional and emerging artists from the Yukon, northern neighbours (Alaska, northern BC, Northwest Territories and Nunavut), and circumpolar countries are encouraged to apply. Jenni House is an ideal space for artistic collaboration and joint residency applications are accepted. The next deadline is September 22nd. Apply here.

…..Project Muse features an important study of some of jazz history’s marginalized figures, “On the Outer Rim of Jazz: Mexican American Jazzmen and the Making of the Modern Pacific Borderlands, 1950–1969” by Mike Amezcua of the University of Notre Dame (Journal of Social History 50.2 (Winter 2016): 411-431).

…..a new article by Lewis Porter on WBGO.org, “In Praise of Art Tatum, Stealth Radical in the Jazz Piano Pantheon,” re-historicizes legendary pianist Art Tatum as a musical innovator. Porter writes, “I see Tatum as a highly experimental artist who was confined by having to play standards all his life.” (Thanks to Mark Miller and Fernando Ortiz de Urbina for this link.)

…..percussionist / composer Anthony Brown will present his “reimagining” of Max Roach’s “We Insist! Freedom Now Suite” at San Francisco’s Herbst Theatre on Sept. 24 as part of the 10th annual SF Music Day celebration. “Look at the failure of our government just since the election to address the socioeconomic and racial injustices in this country. It’s getting worse every day,” says Brown, a Berkeley musician and scholar who is of African, Choctaw and Japanese ancestry. “As artists of conscience we have to speak up.”

…..besides the IICSI-affiliated Guelph Jazz Festival, the Canadian improvising scene has noteworthy events this fall including