Photo of d’bi.young by Paul Watkins. More photos of the event, here.

“we tellin’ stories yo”: A Performance and Interview with d’bi.young. d’bi.young anitafrika is a Jamaican-Canadian dub poet, monodramatist, educator, and Dora Award-winning actor and playwright. In this month’s Oral History we are gifted with an on stage interview with d’bi.young, and we get to witness the power of dub poetry in action by one of Canada’s most renowned dub poets. Dub poetry is a form of performance poetry with a West Indian aesthetic and origin. It evolved out of dub music comprised of spoken word pieces over reggae rhythms and Nyabinghi traditions (The Nyahbinghi Order is the oldest of all the Rastafari mansions and the term translates as “black victory”) in Jamaica beginning in the 1970s. d’bi.young thinks through dub vis-à-vis her own mother’s manuscript on dub, which identifies the four major elements of the then emerging form: music, language, politics, and performance (“r/evolution” 27). Dub, as such, bridges the personal and the political, and as d’bi developed her own understanding of dub she added four more elements for a total of eight: “urgency, sacredness, integrity, and self-knowledge. I then renamed the earlier elements of music, politics, and performance to rhythm, political content and context, and orality” (27). For d’bi.young, the principles of dub poetry—consisting of self-knowledge, orality, rhythm, political content and context, language, urgency, sacredness, and integrity—combine to comprise “a comprehensive eco-system of accountability and responsibility between my audiences and me” (27). As such, dub poetry has the power to connect disparate communities together—like a large multicultural dub mix—through lines of solidarity.

Aside from being one of Canada’s first-rate dub poets, d’bi.young is also one of Canada’s original dub theatre practitioners, developing a genre of storytelling that she refers to as biomyth monodrama. d’bi.young explains that her “use of the term biomyth refers to the abbreviation of the words biography and mythology. I first encountered the term reading audre lorde’s zami, which she refers to as a biomythography […] biography-mythology or biomyth, therefore, is the poetic space between what we interpret as real and what we deem make-believe. monodrama is theatrical solo-performance work” (29). Many likely first encountered d’bi’s work in Trey Anthony’s da kink in my hair, which garnered her a Dora nomination for best actress, or perhaps on the television sitcom Lord Have Mercy!. Since then d’bi.young has performed 9 different dub theatre pieces: solitary, yagayah, androgyne, she, domestic, the sankofa trilogy (featuring the award winning monodramas blood.claat, benu, and word! sound! powah!), and nanny: maroon warrior queen. Aside from her prolific presence on the stage, along with the numerous books of poetry and music she has released, d’bi is concerned with giving back to the community through various outreach efforts, notably as the artistic director of YEMOYA, an international artist-residency based in Jamaica. 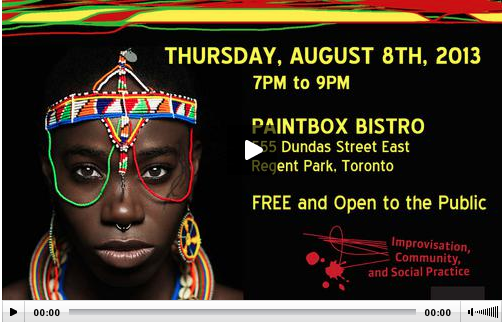 In this month’s Oral History, Paul Watkins (ICASP GRA, writer, poet, DJ) sits down with d’bi.young for a live on stage interview at Paintbox Bistro in Toronto. They discuss dub poetry/music in relation to improvisation, the role of the storyteller, community, and rebel poetry/revolushin, among other diverse topics. Before the interview there was a DJ set by DJ Techné (Paul Watkins), and a performance from d’bi.young, both included below.