Tanya Tagaq is an Inuk throat singer, a cappella artist, songwriter, and visual artist from Cambridge Bay (Ikaluktuutiak), Nunavut, Canada, on the south coast of Victoria Island. While studying visual arts at the Nova Scotia College of Art and Design she developed her unique solo form of Inuit throat singing, which is normally done by two women. Tanya Tagaq might be the only “pop” artist to combine free improvisation with Inuit throat singing. As Jon Caramanica of the New York Times describes, “[Tagaq] made it (Inuit throat singing) sound fiercely contemporary, futuristic even. Recalling animal noises and various other nature sounds, she was a dynamo, delivering a sort of gothic sound art while she stalked the small basement stage with feral energy.”

Tagaq is perhaps best known for her collaborations with Björk, which includes touring with Björk and appearing on the 2004 album, Medúlla. Tagaq has collaborated with a number of artists, including Buck 65, the Kronos Quartert, Mike Patton, among many others. Her 2005 album, Sinaa, an Inuktitut word meaning “edge,” was nominated for five awards at the Canadian Aboriginal Music Awards, winning awards for Best Producer/Engineer, Best Album Design, and Tagaq herself won the Best Female Artist award. Sinaa was also nominated for the Best Aboriginal Recording at the 2006 Juno Awards. Her most recent album, the 2008 Auk/Blood, won a Canadian Aboriginal Music Award and was nominated for two Juno Awards: Best Aboriginal Recording and Best Instrumental Recording. In 2011, she released a live album titled Anuraaqtuq, recorded from her May 2010 performance at the Festival International de Musique Actuelle de Victoriaville. More recently, Tagaq has ventured into film, contributing to various soundtracks and working as both musician/narrator for the award-winning National Film Board documentary, This Land. In 2012 Tagaq performed the theme music for CBC’s televised show, Arctic Air.

In the following live interview, Laurie Brown, the host of The Signal on CBC Radio, interviews Tagaq about everything from her biography, musical intuition, performance and collaboration, homecoming, and the energy of her live shows. The interview took place at The Guelph Jazz Festival Colloquium on “Improvisation, the Arts, and Social Policy” on September 9-11, 2009. 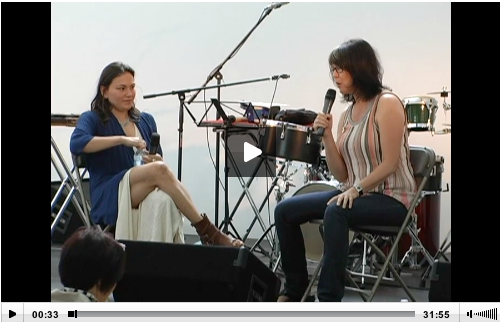 A full transcript of the interview is available here.