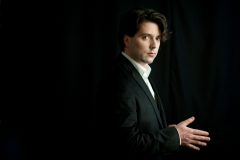 Andrew Staniland began January 2019 as IICSI Site Coordinator at MUN, and serves on the Executive Committee, the Management Team, and the Digital Tools Committee. Andrew is a faculty member in the School of Music at Memorial University in St John’s Newfoundland, where he founded MEARL (Memorial ElectroAcoustic Research Lab). At MEARL, Andrew leads a cross-disciplinary research team that has produced the innovative Mune digital instrument: www.munemusic.com.

Described as a “new music visionary” (National Arts Centre), composer Andrew Staniland has established himself as one of Canada’s most important and innovative musical voices. His music is performed and broadcast internationally and has been described by Alex Ross in the New Yorker Magazine as “alternately beautiful and terrifying”. Important accolades include 3 Juno nominations, the 2016 Terra Nova Young Innovators Award , the National Grand Prize in the EVOLUTION Composers Competition (presented in 2009 by CBC Radio 2/Espace Musique and The Banff Centre), and the Karen Keiser Prize in Canadian Music in 2004.

Learn more about Andrew and his work at: https://andrewstaniland.com/