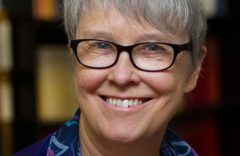 Beverley Diamond is the Canada Research Chair in Ethnomusicology at Memorial University of Newfoundland where she established the Research Centre for the Study of Music, Media, and Place (MMaP). She is known for her research on gender issues, Canadian historiography, and indigenous music cultures. Her research on indigenous music has ranged from studies of Inuit drum dances and Saami joik, to indigenous audio recording, and, most recently, expressive culture in relation to the Truth and Reconciliation Commission on residential schools. She co-edited Aboriginal Music in Contemporary Canada: Echoes and Exchanges (McGill-Queen’s UP, 2012). Among her other publications are Native American Music in Eastern North America (Oxford UP, 2008) and Music and Gender (U Illinois P, 2000). She was elected to the Royal Society of Canada in 2008, named a Trudeau Fellow (2009–12), and appointed as a Member of the Order of Canada (2013). In 2014, the Social Sciences and Humanities Research Council of Canada awarded her the Gold Medal in recognition of her outstanding work.