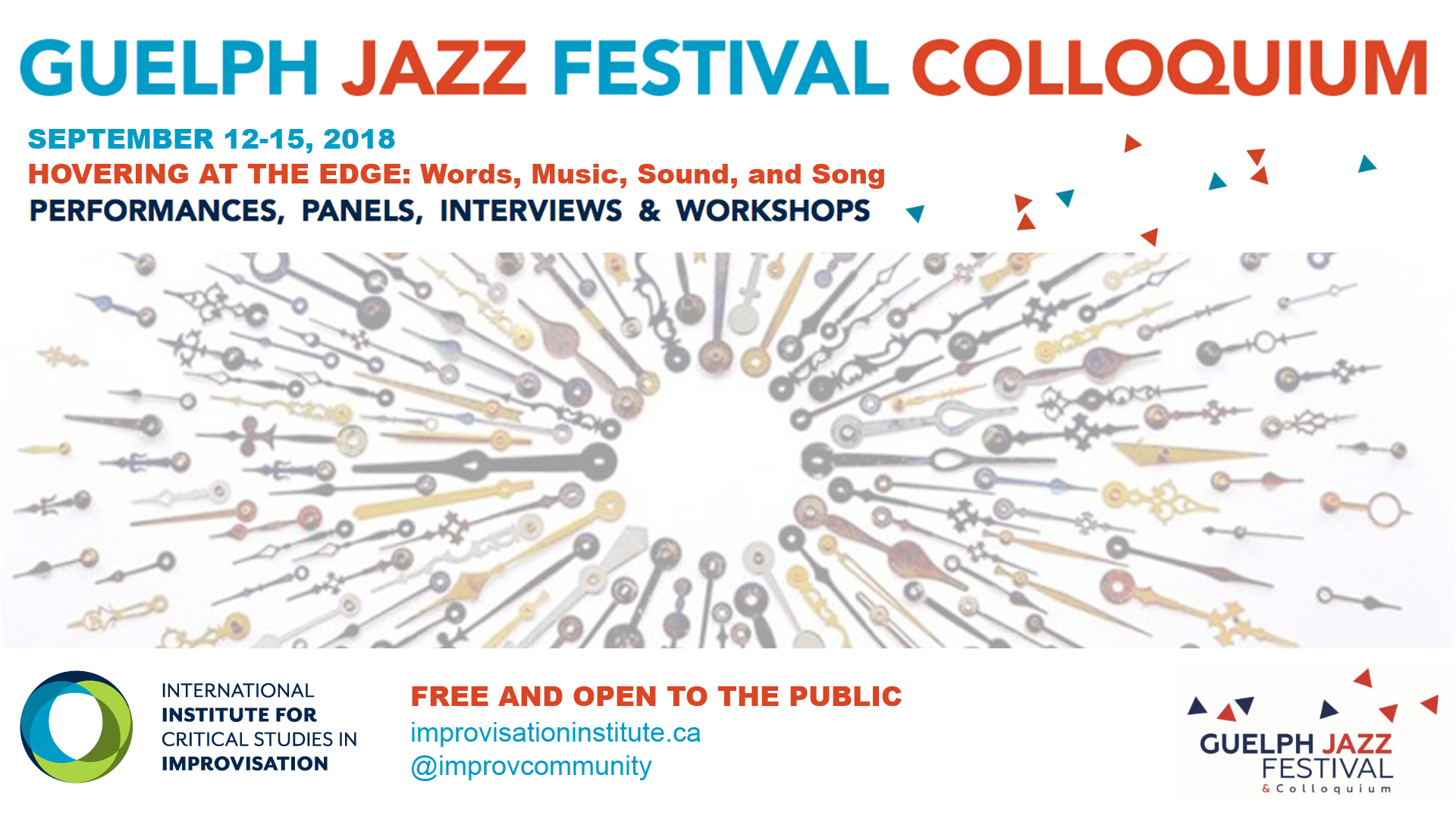 Hovering at the Edge: Words, Music, Sound, and Song

Jump to schedule.
Jump to presenter abstracts and bios.

Hovering at the Edge: Words, Music, Sound, and Song, this year’s Guelph Jazz Festival Colloquium, will feature curated panels, speakers, and performances, with participants riffing on the interplay among words, music, sound, and song.

The Colloquium is hosted by IICSI in partnership with the Guelph Jazz Festival, the University of Guelph, Central Student Association, CFRU-FM, Guelph Film Festival, Eden Mills Writers Festival, and the Art Gallery of Guelph. 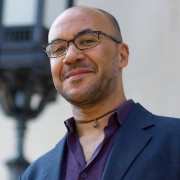 In his book Epistrophies: Jazz and the Literary Imagination, keynote speaker Brent Hayes Edwards attests to the vibrant and compelling history of interplay in African American art-making and performance between sound and writing. Drawing specifically on transmedial encounters in jazz that “[hover] at the edge” of language, and literary texts that aspire to the condition of music, Edwards explores the ways in which “the practice of one medium can be inspired, provoked, or extended by an attention to the specificities of another.”

Edwards will present his digital restoration of the legendary 16mm short film Sweet Willie Rollbar’s Orientation, originally made and scored by saxophonist Julius Hemphill in 1972 during his keynote on Friday, September 14. The film also features poet K. Curtis Lyle, actor Malinke Elliott, and other members of the Black Artists’ Group of St. Louis. Following the screening, Edwards will contextualize the film among the Black Artists’ Group and in relation to other black experiments in multimedia aesthetics in the early 1970s.

Inspired by an initiative developed by our friends and colleagues at the ArtsEverywhere Festival, and in partnership with the University of Guelph, the Colloquium invites students and community members to join our inaugural Emerging Scholars Program. This program offers up to ten individuals (from all levels of study) an opportunity to participate in the program and engage with participants.

Selected scholars will receive tickets to Guelph Jazz Festival performances, an intimate 2-hour “emerging scholars breakfast” with panelists, presenters, and other distinguished guests including Lawrence Hill, and an opportunity to publish insights gained at the Festival and Colloquium on the IICSI website.

Emerging scholars will be expected to attend colloquium events and write a short reflection piece on their experience.

2018 Improvisers-in-Residence Jen Reimer and Max Stein’s ongoing project, Sounding the City, is dedicated to re-imagining the urban soundscape through site-specific installations and acoustic interventions. These installations emerge from their surroundings and occur in the environments themselves. They invite our ears to focus on the music of the places we find ourselves in, and draw our gaze towards characteristics of urban environments that might otherwise go unnoticed. Co-presented by Musagetes (artseverywhere.ca)
Boarding House Arts, 2nd floor, 6 Dublin St. South + site-specific installations throughout Guelph 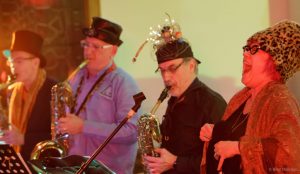 Sung Ra performance at Church of the Ascension

In 2000, Rakestar formed as a musical and anagramic tribute to the Arkestra of the legendary Saturnian composer, pianist, and all-around-wisdomystic, Le Sony’r Ra, better known as Sun Ra, and played in Guelph in 2002. In 2017, the group’s leader Rory Magill mounted the ambitious program called SUNG RA, devoted to Sun Ra’s songs and poetry through a collaboration with Ottawa’s Tone Cluster Choir, an LGTBQ vocal group under the direction of the exceptional Toronto vocalist and conductor, Christine Duncan (of Element Choir-fame). To kick off this year’s festival, we are delighted to hear Rory and company remount SUNG RA, this time featuring a massed choir comprising singers from Element Choir, the  Rainbow Chorus of Waterloo-Wellington, and a few other intrepid singers, to sing and play songs that swing, dance, incant, and travel the spaceways. Rory Magill (keyboards and trombone), Don Cummings (Hammond organ), Mike Essoudry (drums and clarinet), David Broscoe (alto and baritone saxophones), John Sobol (tenor and baritone saxophones), Rob Frayne (tenor saxophone and electronics), Scott Warren (perscussion and transmissions), and Christine Duncan (voice and conducting)

Edwards will present his digital restoration of the legendary short film Sweet Willie Rollbar’s Orientation (1972), featuring an original soundtrack by saxophonist Julius Hemphill, placing the film in the context of the Black Artists’ Group, and in relation to other black experiments in multimedia aesthetics.
Lecture Room, Art Gallery of Guelph 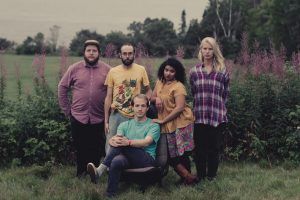 Montréal-based composer, singer, and multi-instrumentalist, Thanya Iyer, and her group make intelligent and sumptuous song-based experimental music. It moves gracefully and seamlessly between various kinds of music-making in ways that undermine simple genre classification. It is underpinned throughout by Iyer’s gorgeous voice, her knack for writing captivating melodies, and the inventive playing by her and her bandmates, Alex Kasirer-Smibert (bass and electronics), Daniel Gélinas (drums and more), and Simon Millerd (trumpet). This group has been touring tirelessly since mid-2015, through which the group’s sound has galvanized and been refined in ways readily apparent on their 2017 release, Do You Dream? (The answer, we say, is ‘Yes. We dream of hearing inventive, daring, and beautifully original music like yours!’)

4:00 | Artist Panel
Darius Jones (USA), Emilie Lesbros (France), Amirtha Kidambi (USA), & Thanya Iyer (Québec)
Moderator: Kevin McNeilly
Jazz Festival artists will gather to reflect on the interplay between words and music. Drawing upon a wealth of experience presenting lyrical material in combination with improvised and composed performances, panel participants will share their understanding of how these two mediums combine and influence each other in the execution of jazz musicking. Saxophonist Darius Jones joins collaborating vocalists Emile Lesbros and Amirtha Kidambi, alongside band leader Thanya Iyer for a rare opportunity of knowledge transfer from a panel with a unique perspective on implementing the connection between sound and song.
Silence, 46 Essex. St. 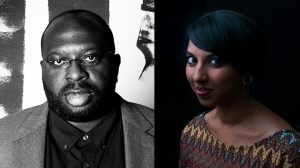 These musical friends and close colleagues are both in Guelph to lead their respective bands, which provides a golden opportunity for an intimate voice-saxophone duo concert. Singer Amirtha Kidambi contributed in extraordinary fashion to The Oversoul Manual (AUM Fidelity), saxophonist and composer Darius Jones’s all-vocal (but wordless) suite, the fourth installment of his Man’ish Boy Epic, performed by the Elizabeth-Caroline Unit. Kidambi has clearly been inspired by working with Jones, and has incorporated and synthesized his approach to composing for voice in the context of her group, Elder Ones. This concert provides a superb opportunity to experience the close rapport of these special musicians. 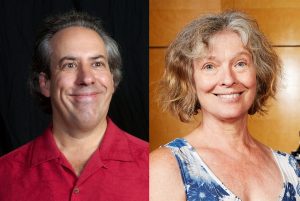 The Montreal trio of Jean Derome (woodwinds), Normand Guilbeault (double-bass), and Pierre Tanguay (drums) is renowned for dedicating each set of a multi-set concert to pieces by a single composer, giving listeners a rich immersion into the work of, for example, Charles Mingus, Fats Waller, Duke Ellington, or Misha Mengelberg. Somebody Special extends this research to the singular repertoire of American soprano saxophonist and composer, Steve Lacy. Since Lacy’s death in 2004, several repertory bands have emerged to play his vast book of compositions, but Somebody Special is one of the very few to focus on Lacy’s songs, composed for his wife and close music partner, Irene Aebi, settings of wonderful texts by published poets and artists. For this formidable task, Jean Derome has engaged one of Canada’s great singers, Karen Young. With pianist Alexandre Grogg rounding out the ensemble, Somebody Special (named for a Lacy song based on a text by Brion Gysin) will no doubt be something special indeed.

All Colloquium events are free and open to the public.

This colloquium is generously sponsored by the Social Sciences and Humanities Research Council of Canada (SSHRC), the Art Gallery of Guelph, the Office of the Vice-President (Research), the Office of the Associate Vice-President (Student Affairs), the School of English and Theatre Studies, the College of Arts, CFRU-FM, and the Central Student Association at the University of Guelph. Special thanks also to the Eden Mills Writers’ Festival, the Guelph Film Festival, and the Bookshelf for their support.