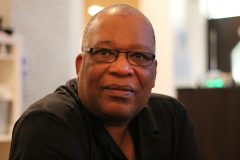 Cecil Foster believes improvization is intrinsic to living. It is standard to the human condition. These ideas infuse Foster’s work. An author, academic and a public intellectual, Foster argues, in his latest academic work Genuine Multiculturalism: The Tragedy and Comedy of Diversity (MQUP fall 2013), that multiculturalism at its idealistic best is ethical improvization. Multiculturalism is like a good jazz band with a diversity of musicians playing diverse instruments, all of them accentuating what makes him or her distinctively different, all together producing the sweetness of music. And in his forthcoming novel Independence (HarperCollins Canada spring 2014), Foster captures the improvizing rhythms of life in the Caribbean—specifically Barbados—in the heady days of political independence.

Considered one of Canada’s leading public intellectuals on issues of race, culture, citizenship, and immigration, Foster recently joined the Department of Transnational Studies, State University of New York at Buffalo as professor, Director of Graduate Studies and Associate Director of Canadian Studies. Foster has worked as a journalist for the Toronto Star and The Globe and Mail, as a senior editor for the Financial Post, and in national radio news and national television news for CBC Toronto and for CTV News Network.

His novels include No Man in the House, Dry Bones Memories, and Sleep On, Beloved, which was shortlisted for the prestigious 1995 Trillium award. His acclaimed works of non-fiction A Place Called Heaven: The Meaning of Being Black in Canada won the Gordon Mantador Award for the best Canadian book on social and contemporary issues (1996) and Blackness and Modernity: The Colour of Humanity and the Search for Freedom won The John Porter Tradition of Excellence Book Award (2007). His general non-fiction include, Island Wings: A Memoir and Where Race Does Not Matter: The New Spirit of Modernity.