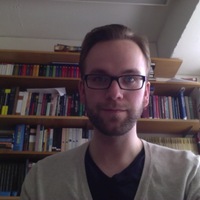 Mark Kaethler, Ph.D. (ABD), studies irony in the early modern theatre of Thomas Middleton and its political ramifications for the constitution of governance between the monarch and the people. His other scholarly interests include medieval studies and popular culture. The philosophies of Paulo Freire, Michel Foucault, and Stephen Powell influence his teaching practice, which is improvisational in nature and community focused. Mark enjoys a vast array of musical styles, but when it comes to jazz his favourite artist is Charlie Parker, his most beloved album is Out to Lunch by Eric Dolphy, and his choice track would be “Blue Train” by John Coltrane, though in actuality such preferences really depend upon how one feels on a given day.