Interactive Improvisation in Times of Isolation 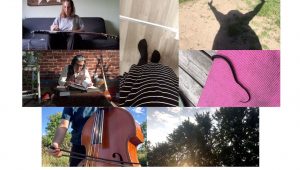 Interactive Improvisation in Times of Isolation Collage Photos provided by the artists.

The aim of this project is to creatively showcase the realities of living in isolation. The group will produce a series of 14 short audio-video recordings of individual improvisational responses to ambient recordings (e.g., early morning birdsongs) and responses to each other’s improvisations in lieu of collaborating in person. The ambient recordings signify the current reality, where nature exists, even thrives, with muted human intervention. The responses to the soundscape recordings signify our awareness of that reality “out there”, with our emotional responses to the isolation we are experiencing. The interactions to each other’s responses signifies our adaptability, where we find ways to listen and engage, when in a “normal” situation we would interact face-to-face in the moment. Deep and critical listening can still be undertaken, even acting in physical isolation. The project also draws on awareness of neuro-diversity, where autism (and other assessments such as FASD) engenders creative responses to other, ongoing forms of isolation. Isolation can be uncomfortable when enforced, but can provide space for reflection and creative engagement.

The premise for this project was to creatively respond to a recording of local birds at dawn. With human activity more muted during this period of COVID-19-enforced isolation, such soundscapes are more prominent. Each participant produced an improvisation while listening to the bird recording. Because of isolation, no one was able to listen to anyone else’s contribution until they were compiled. The shared history of the musicians, however, was present in the background. The unplanned synchronicities of the performances add a poignancy to the music. As an additional layer of creative response, the audio mix brings the different performances in and out of focus. Cool Hearts intends to produce a series of these isolation projects over the coming period of ongoing social caution.

U of G capturing the changing world of the pandemic through art – [GuelphToday.com]

The Improvisation in Times of Isolation Project received funding from the University of Guelph’s Creating in a Time of Coronovirus Fund, College of Arts, and Private Donors.