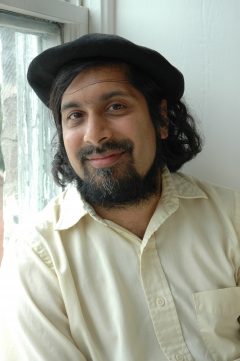 Ajay Heble is Director of the International Institute for Critical Studies in Improvisation and Professor of English in the School of English and Theatre Studies at the University of Guelph. He is the author or editor of several books, and a founding co-editor of the journal Critical Studies in Improvisation/Études critiques en improvisation ( www.criticalimprov.com ). He was the Project Director for Improvisation, Community, and Social Practice, a large-scale Major Collaborative Research Initiative, funded by the Social Sciences and Humanities Research Council of Canada.

As the Founder and Artistic Director of the Guelph Jazz Festival, Heble has jolted the citizens of Guelph into an appreciation of improvised and avant-garde music and delighted aficionados from around the world with his innovative and daring programming. Under his visionary leadership, the Festival—winner of the prestigious Premier’s Award for Excellence in the Arts (2010), and a three-time recipient of the Lieutenant Governor’s Award of the Arts (1997, 2000, 2001) —has achieved a rock-solid international reputation as one of the world’s most inspired and provocative musical events. Recent projects include two new books both published in 2013 by Duke University Press: People Get Ready: The Future of Jazz is Now (co-edited with Rob Wallace), and The Fierce Urgency of Now: Improvisation, Rights, and the Ethics of Cocreation (co-authored with Daniel Fischlin and George Lipsitz). As a pianist, he has released three CDs: Different Windows, a live recording of improvised music with percussionist Jesse Stewart (on the IntrepidEar label) and two recordings with his improvising quartet The Vertical Squirrels: Hold True / Accroche toi (on Ambiances Magnétiques) and Winter’s Gate (on Barcode Free).