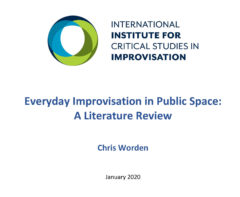 Everyday improvisation in public space is an extremely broad topic, and the structure of this literature review speaks to that. Rather than providing a cohesive overview, I have instead opted to focus on a few select areas and examples of how this phenomenon is discussed in social theory and social science research (particularly sociology and human geography), as well as providing some examples that may be of interest to IICSI in terms of philosophy of improvisation or applications for improvisation. As this is primarily intended to be an internal document for IICSI, I have omitted most of the literature from the field of improvisation studies, since it is already well-known in the organization (most of it having been produced by research associates or staff).

The first section of this literature review deals with embodied actors encountering each other in public space, and how improvisation can be understood to play a constant part in this process. It also raises some questions about public art interventions and the ethics of civil inattention. The second section deals with how human interaction shapes public space itself, and how public space is created out of the contingencies of that interaction. The third section functions as a catch-all section for material that didn’t quite fit in the first two sections. Under subheadings, I briefly address the use of improvisation in military studies, how augmented reality games (ARGs) may allow for smartphones to promote rather than inhibit innovative engagement between people in public spaces, and the role of improvisation and social critique in maintaining the neoliberal social order.